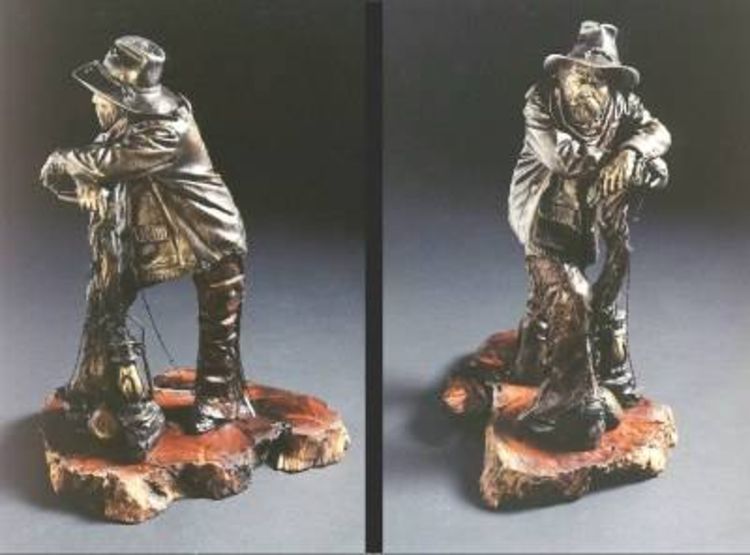 "Fences!", a portrait of an early cowboy taking a break from "working the fence line." with canteen of water to slake his thirst and trusty lantern to light his way through the approaching darkness, except for this occasional respite to look back on progress and forward on future - his labors are without end. Symbolically, the allegory runs much deeper. Today, as in the old west, fences represent exclusion and limitation, equally for those on either side, restricting our perspectives to certain cherished beliefs. Now, as then, the greater need is to cut those fences, rather than to string anew. This cowboy is prepared: clothed for stormy weather, with spurs to ride hard and swift, chaps to ward off the thorns and brambles of adversity, quirt to lash out of the way the nay-sayers, do-nothings, and sycophants of negativity. Guided by the Lantern's Light and armed only with the sharp knife of truth and the incisiveness of his fencing tool, like the little David of old, he is still the battle against the Goliath of Falsehood. He stands four-square upon the Rock of Truth- the world will adjust. In keeping with his deep spiritual convictions and social consciousness, Muir's sculptural subjects have expanded to reflect the critical nature of the times in which we live. Yet, whether historical or contemporary, "the golden thread that ties it all together is still my never-ending quest for the essence of life- for Truth in its purest form."